There is a long list of reasons some people in academia will make up for justification as to why they won’t let you “sit” (interact) with them. For example,

I learned early on in graduate school if I can’t sit with them, then I would perhaps miss out, but I also saw if tried to appease them I wouldn’t ever be able to because it was and is impossible to be anything but who I am. I couldn’t sit with them looked like the time I couldn’t do a group project with them because my work made them look bad and disrupt this narrative where they are the almighty experts. Next they tried to tell my professor that I wasn’t pulling my weight because they thought they know everything about everything including the topic I came to graduate school to study, community colleges. Then they tried to make me look bad simply because they truly believed they are above me, but soon I realized it’s not just me they think they are above-it’s everyone because perhaps that is how they learned to survive the elite places they came from and thought they didn’t belong at.

Some folks learned before graduate school that if they played the game right, they deserved it all and there are reasons they had the right to believe it, afterall they had the good grades in high school, the right advisors, funding, connections and opportunities. So when the moment of truth comes and I ended up being called to show on demand to the group after the person calls over my professor for the survey count reveal. I knew what was happening so I took a huge stack out of my backpack and set them down quietly on the table. I had gathered more than ¾ of the surveys for the group project and it was all because I knew I would get more responses in person (really it wasn’t that hard to know-I credit my organizing background) even though it took longer and even after all that work you know what? They still didnt like me. They actually liked me a lot less and wouldn’t talk to me the rest of grad school and at a conference years later in the same room I was ignored like I didn’t exist. I accepted I wouldn’t ever belong to a clique. Folks knew I didn’t come from the Ivy League or top UC or other elite school, more than that though they know my professor knows that because it was that same professor who said during a meeting of students that “oh look we have people from Harvard here, UCLA, NYU, and oh we even have people from COMMUNITY COLLEGE” as she walked over to stand directly in front of me.

That’s right. That happened. And while it could be a cringe worthy moment where I should’ve slumped in my chair and try to disappear, I didn’t. I certainly didn’t shout out that I am also a proud alum of UC Santa Cruz (Go Banana Slugs) who won a Dean and Chancellors award for my thesis on community college students.  I  just sat silently and shook my head yes proudly just as I’ve done since high school when I knew where I was destined to go because I almost got kicked out of high school (I then got kicked out on academic dismissal my first year of community college), but I knew inside while my stomach turned in knots what had happened and honestly recalling it now is still painful as I think to all the thoughts over the years that the discrepancy in treatment in regards to funding and opportunities started long before I entered graduate school, but others will make it seem like it exists because they believe they are inherently better. The system is rigged. Most of us know that, but meritocracy has us believing if we just worked harder, longer, we will prove ourselves worthy and will be accepted.

No one plays that game and comes out a winner without losing themselves.

The thing is this type of clique-ish behavior wasn’t solely confined to my graduate program. I soon began to see it across disciplines and then across conference spaces and all over academia. All of this struggle to be accepted can quickly become a constant game of having to prove yourself and your worth to someone all the time and if you chose to play that game and it is exhausting because the institution demands us to do it all the time anyways, but if we (those who believe in social justice) truly wish to sustain, thrive and continue to fight, we must build community and move towards truly decolonizing and breaking down this system in place that makes us continually think and act in ways where we must fight each other for crumbs.

In closing, I have learned you don’t need anyone to validate you and it’s a struggle in a system that is built off getting peer reviewed publications and letters of reference in order to get a good job (or just a job period), but don’t forget why you are here and that you are good enough to be there, to be here, and our communities need you to keep doing important work. Take care of yourselves and build with those who love you without justification. These folks may not be found in graduate school or academia and they may be folks without formal schooling and degrees (because that isn’t the only type of people that matter in this big world). And when you think about it long enough you’ll see maybe you don’t need a seat at this table you aren’t welcomed at anyways especially if those around it are simply reinforcing the same oppressive systems that are already perpetuated over and over again in the education system and larger society.

Maybe you long for a place to stand.

Let us now continue creating them.

Photo: Me and some of my support at my dissertation defense 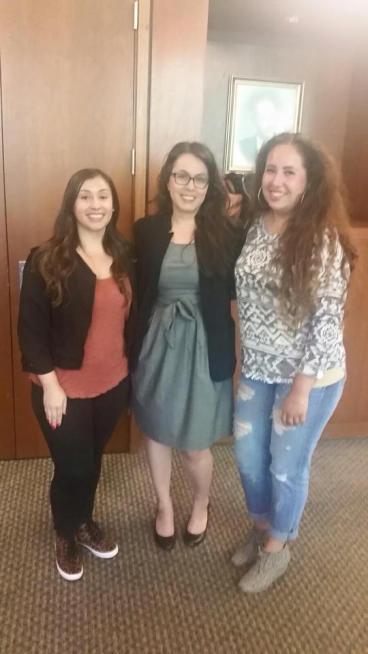