If it’s Inaccessible to the Poor, Then What Is It?
By: Xicana Ph.D.

I have seen the quote many times, “If it’s accessible to the poor, it is neither radical nor revolutionary”. I agreed with this phrase, but then something happened that made me question how easy it is to call something out as not being radical or revolutionary. It is time to be honest though, call this what it is, I use the example of a recent conference I attended in this piece, but we know in the end if it is inaccessible to the poor, it is unjust. This is not social justice. Stop pretending. If a space or place is not radical or revolutionary how are they really spaces of social justice?  Are they spaces where we dismantle oppression? Or do these spaces and upholding of them also uphold these systems and practices that have kept many of us outside of institutions of higher education to begin with?

I began to think about academia, about my own experiences post Ph.D. and not having access to resources and opportunities as I have previously wrote about being a person who has a Ph.D. and was on welfare.

There are many places within higher education that we preach equity, equality, and commitment to making things “accessible”. How accessible are they really though if students struggle at every turn especially if they are poor, working class, marginalized and/or People of Color? I was reminded more of this in July when I went to present at a conference I had not attended in many years. I was accepted to do a presentation titled “Surviving Single Motherhood in the Academy and Beyond” and facilitate a writing/poetry workshop titled “Writing Resistance”. I was excited because the conference is related to issues that Chicanas and Latinas face. I was especially excited because I had felt isolated since I do not work in academia and have not really done much academic related (by some people’s standards) since I graduated in the end of 2015. I often say I am an independent scholar. I love to teach. I love to learn. I love education and interacting with people who also love and value these things. I’ve learned that doesn’t mean academia is where I find the people I need and can relate to on those values though.

I couldn’t afford to go to the conference, but was determined and friends messaged or reached out to offer support, many of them outside of academia, but a few in. At last minute, my son also had to come with me because his father could no longer watch him and so I asked my current partner to also come with me so I could have help. I went back and forth not wanting to go, but because my friends and community believe in me, I was determined. Even my partner’s mom believing in what I do (even though she doesn’t know details) and thinking maybe the conference would help put me in a better place after losing my job and being on welfare, she also offered support for me to be able to afford to make an 8 hour drive (took 12 with a 4 year old) up north.

After all the driving, we finally got to the hotel at 4am. I was supposed to present at 9:00am. After staying up late to finalize my presentation I must had 3 hours of sleep. I got to the conference slightly before 9am and was ordered to check in prior to going to my room. I went to check in and encountered an unwelcoming table. I gave the woman at registration my name and she couldn’t find it. I said well I need to go present right now and she said I couldn’t go anywhere until I registered and they saw proof on their computers. I then was forced to fix my registration in front of them on my phone. By that time it was 9:15am. I kept thinking if the presenters on the panel go in order I am ok, I am last on the program. I felt anxiety creep in, thinking this was a bad idea to come here. Then finally it was done and the person rudely told me I had been cleared. As she spoke, the other person at the table had handed me a program and I was skimming through it to quickly find my room to present, then suddenly the other person interrupted saying take the program and how I couldn’t have it. Her colleague asked why and the person said programs are for pre-registered people only. Her colleague responded, “but she would’ve been registered yesterday if you hadn’t of closed it”. Then the person took the program from me and I asked, “how am I supposed to know where to go to present? Can I see the program?” I wanted to cry and began to as I walked away trying to remember the room number I had briefly seen on the paper before she took it. I turned back and told her this is not how you treat people and pushed the button on the elevator. I registered late because I didn’t have the money. I registered late because of making arrangements with my son falling through, but all this reminds me as a poor person and as a mama on welfare, with a Ph.D. or not, I didn’t belong there and these people do not see me as a peer.

I made it to the room. It was full and I soon realized one presenter hadn’t shown and the two left on the panel had already presented and were now on questions/comments. I was upset from what just occurred and had wanted to leave. It took everything I had to walk into that room. I recognized one presenter as someone I had met in graduate school and felt a little better. She introduced me and I began to present my paper “Surviving Single Motherhood in the Academy and Beyond” and told the room a little about why I was late. I knew I couldn’t get through the whole paper so I cut it short and said if anyone wanted to see it they could ask me to share it with them through email. The person I knew opened it back up for questions and a woman immediately raised her hand. She said loudly, “This is why you don’t have kids in graduate school”. I was shocked. I was angry. I started to pack up my things to leave, but I sat back down. I heard people interject. I heard people crying as they told their own stories being on welfare or experiencing DV, or other similar situations I raised. I heard other women telling their stories of themselves or their families. There was a lot of shaming from the woman for people being mothers, for being poor, and her perception that as women if we had kids we were  not taking academia “seriously” and that no one should have kids if they can’t support them. I was in shock, but now I am not surprised. These are common narratives and if we don’t hear them, we often feel them and it comes out in the ways we are treated, offered opportunities or denied them.

If it’s inaccessible to the poor, then what is it? I contemplated writing the leadership of the organization, but they were aware of it as I heard from many word got around and they chose not to respond. I don’t have the energy. I know my complaints won’t likely be heard since people were aware and chose not to do anything. I am not new or unknown to these spaces, but these spaces are often very cliquish in nature and those cliques are formed based usually on the elitism of the schools either one got their degrees at or teaches at. I left saddened that I had sacrified a lot of time and resources to go to a place that I realize now is not for me as much as I have fought to be apart of it previously.  I drove home saddened. As a poor person, as a mama on welfare, as a Xicana-Ph.D. or not-I know where I am welcomed and where I am not. I know many people will never see me as their peer.

Ultimately I see how my value in academia is determined by who I know, my connections, and elitism of institutions I am affiliated with (or not) and those rules are strongly upheld by those who can make determinations. Usually instead of creating access many people in these positions continue to serve as gatekeepers to the academy denying access to whoever they deem unworthy. My value in academia is based on conforming to certain standards including how I dress, how I write and how I speak. My value in academia is based on publications, now knowing it is often publications I am accepted to by people who I know or went to school with (this happens a lot-way more than I knew about). My value is especially determined by the title of my job, the title of my job and the title of an institution that is supposed to validate my worth even though we preach all the time how our value shouldn’t be determined by the institution to begin with. It is time to be honest, call this what it is, conferences are just one example in academia, but we know in the end if it’s inaccessible to the poor, it is unjust. This is not social justice. Saying something isn’t revolutionary or radical is no longer enough, saying we are critical when reinforcing the same systems of oppression is the exact opposite and we need to say what it is so we can work on change in necessary ways so that resources and opportunties will be accessible to poor, marginalized communities/people and People of Color. 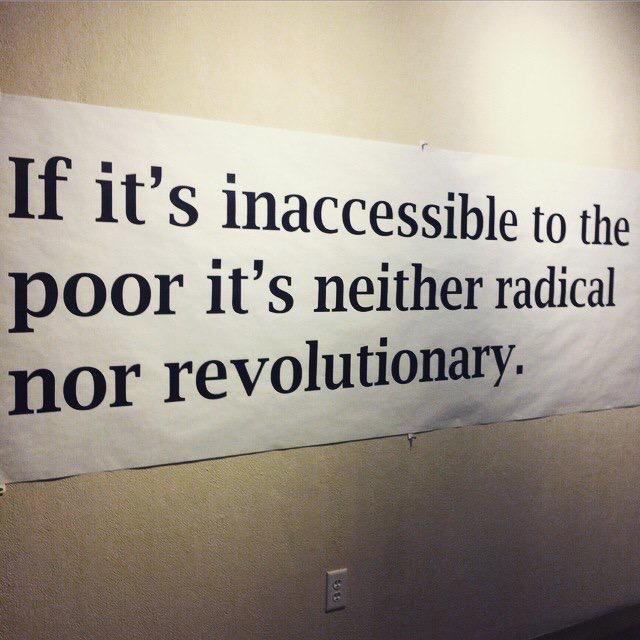 4 thoughts on “If it’s Inaccessible to the Poor, Then What Is It?”